A Game of Thrones

14 Jul A Game of Thrones

What’s a fan of George R.R. Martin to do? Season Two of HBO’s acclaimed miniseries A Game of Thrones has just finished up and only God knows when Book Six (tentatively titled The Winds of Winter) in A Song of Ice and Fire saga will be published. May I suggest that fans of George R.R. Martin’s medieval fantasy try out A Feast of Ice and Fire: The Official Companion Cookbook newly available at the library.

The cookbook is the product of the immense Internet fandom inspired by Martin’s works. Chelsea Monroe-Cassel and Sariann Lehrer’s curiosity led the duo to a start a blog documenting their attempts at cooking up some of the dishes mentioned in the stories. They still maintain that blog – innatthecrossroads.com  – which includes additonal recipes and commentary not featured in the book.

But what if you haven’t read the Fire and Ice books or seen the miniseries? The Library has those too! There is little I can add to the lauds already heaped on Martin and his Locus Award winning series. It’s a riveting story well told. And don’t let the “fantasy” label scare you away. There are some fantasy elements to be sure –  dragons, a bit of magic, etc. But these stories are primarily focused on complex characters who struggle with competing loyalties, ambitions for power, greed, lust, and honor. Martin’s eye for detail brings to life everything from the byzantine machinations of the Seven Kingdoms politics to the sumptuous heraldry and feasting of the noble families. A Song of Ice and Fire is a highly entertaining, suspenseful series. 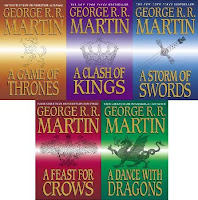 Whether you’re looking to cook up some Honey-Spiced Locusts to poison a queen, recreate King Joffrey’s 77 course wedding feast, or simply whip up a delicious meal to enjoy while you re-watch A Game of Thrones, A Feast of Ice and Fire will delight fans and risk-taking cooks alike.