Stay-cation’s All I Ever Wanted

11 May Stay-cation’s All I Ever Wanted

Are you stuck at home, wishing you could take a trip and explore? Try seeing the world through pages in books about road trips and vacays! You can leave the state, and even the country, with these adventurous reads. Lulu and Milagro’s Search For Clarity by  Angela Velez

Overachiever Luz ‘Lulu’ Zavala has straight As, perfect attendance, and a solid ten-year plan … Middle sister Milagro wants nothing to do with college or a nerdy class field trip … On a journey from Baltimore all the way to San Francisco, Lulu and Milagro will become begrudging partners as they unpack weighty family expectations … and maybe even discover the true meaning of sisterhood. After the sudden collapse of her family, Mim Malone is dragged from her home in northern Ohio to the “wastelands” of Mississippi, where she lives in a medicated milieu with her dad and new stepmom. Before the dust has a chance to settle, she learns her mother is sick back in Cleveland. So she ditches her new life and hops aboard a northbound Greyhound bus to her real home and her real mother, meeting a quirky cast of fellow travelers along the way. But when her thousand-mile journey takes a few turns she could never see coming, Mim must confront her own demons, redefining her notions of love, loyalty, and what it means to be sane. Would-be amusement park aficionado Dalia only has two items on her summer bucket list: (1) finally ride a roller coaster and (2) figure out how to make a new best friend. But when her dad suddenly announces that he’s engaged, Dalia’s schemes come to a screeching halt. With Dalia’s future stepsister Alexa heading back to college soon, the grown-ups want the girls to spend the last weeks of summer bonding–meaning Alexa has to cancel the amusement park road trip she’s been planning for months. Luckily Dalia comes up with a new plan: If she joins Alexa on her trip and brings Rani, the new girl from her swim team, along maybe she can have the perfect summer after all. But what starts out as a week of funnel cakes and Lazy River rides goes off the rails when Dalia discovers that Alexa’s girlfriend is joining the trip. And keeping Alexa’s secret makes Dalia realize one of her own: She might have more-than-friend feelings for Rani.

Best friends are forged by fire. For Winona Olsen and Lucille Pryce, that fire happened the night they met outside the police station, both deciding whether to turn their families in for abuse and mistreatment. They realize they can’t wait until graduation to start their new lives. They need out. Now. All they need is three grand, fast. And really, a stolen convertible to take them from Michigan to Las Vegas can’t hurt. Lina is spending the summer in Tuscany, but she isn’t in the mood for Italy’s famous sunshine and fairy-tale landscape. She’s only there because it was her mother’s dying wish that she get to know her father. But what kind of father isn’t around for sixteen years? All Lina wants to do is go back home. But then she is given a journal that her mom had kept when she lived in Italy. Suddenly Lina’s uncovering a magical world of secret romances, art, and hidden bakeries. A world that inspires her, along with the ever-so-charming Ren, to follow in her mother’s footsteps and unearth a secret that has been kept for far too long. It’s a secret that will change everything she knew about her mother, her father—and even herself. People come to Italy for love and gelato, someone tells her, but sometimes they discover much more. Anna and the French Kiss by Stephanie Perkins

Anna is looking forward to her senior year in Atlanta, where she has a great job, a loyal best friend, and a crush on the verge of becoming more. Which is why she is less than thrilled about being shipped off to boarding school in Paris–until she meets Étienne St. Clair. Smart, charming, beautiful, Étienne has it all…including a serious girlfriend. But in the City of Light, wishes have a way of coming true. Will a year of romantic near-misses end with their long-awaited French kiss? 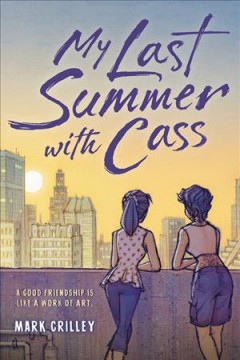 My Last Summer With Cass by Mark Crilley

Megan and Cass have been joined at the brush for as long as they can remember. For years, while spending summers together at a lakeside cabin, they created art together, from sand to scribbles . . . to anything available. Then Cass moved away to New York. When Megan finally convinces her parents to let her spend a week in the city, too, it seems like Cass has completely changed. She has tattoos, every artist in the city knows her. She even eats chicken feet now! At least one thing has stayed the same: They still make their best art together. But when one girl betrays the other’s trust on the eve of what is supposed to be their greatest artistic feat yet, can their friendship survive? Can their art? Kisses and Croissants by Anne-Sophie Jouhanneau

Seventeen-year-old Mia, an American girl at an elite summer ballet program, has six weeks to achieve her dreams: to snag an audition with one of the world’s best ballet companies. But there’s more to Paris than ballet—especially when a charming French boy, Louis, wants to be her tour guide—and the pair discover the city has a few mysteries up its sleeve. In the vein of romances like Love and Gelato, this is the perfect summer adventure for anyone looking to get swept away in the City of Love. I See London, I See France by Sarah Mlynowski

Nineteen-year-old Sydney has the perfect summer mapped out. She’s spending the next four and half weeks traveling through Europe with her childhood best friend, Leela. Their plans include Eiffel-Tower selfies, eating cocco gelato, and making out with très hot strangers. Her plans do not include Leela’s cheating ex-boyfriend showing up on the flight to London, falling for the cheating ex-boyfriend’s très hot friend, monitoring her mother’s spiraling mental health via texts, or feeling like the rope in a friendship tug-of-war. The Summer of Broken Things by Margaret Peterson Haddix

Fourteen-year-old Avery Armisted is athletic, rich, and pretty. Sixteen-year-old Kayla Butts is known as “butt-girl” at school. The two girls were friends as little kids, but that’s ancient history now. So it’s a huge surprise when Avery’s father offers to bring Kayla along on a summer trip to Spain. Avery is horrified that her father thinks he can choose her friends—and make her miss soccer camp. Kayla struggles just to imagine leaving the confines of her small town. But in Spain, the two uncover a secret their families had hidden from both of them their entire lives. Maybe the girls can put aside their differences and work through it together. Or maybe the lies and betrayal will only push them—and their families—farther apart.