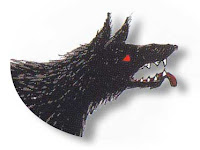 Fifty years ago, long before the Lemony Snicket books were written, Joan Aiken published the first in her Wolves Chronicles series. Set in an alternate England where James III rules and wolves roam the countryside, The Wolves of Willoughby Chase has a wonderful combination of brave kids in danger, truly unpleasant adults, and slightly grim humor.

Although there are a few jokes that are funnier if you know something about English history, Aiken has really made a world that stands on its own. The main characters of the series, Simon, Sophie, and Dido, have to make their way through a dangerous world full of Hanoverian plots to overthrow the king, relatives plotting to steal fortunes, and even a few magical misunderstandings.

I first encountered the series when my grandparents gave me a copy of the third book, Nightbirds on Nantucket. It was one of the weirdest things I had ever read, and I loved it. Dido is not always perfect, but she is brave and always has a keen sense for when things are not right. I gradually read the whole series and they became some of my favorites.

I mentioned Lemony Snicket at the beginning of this post because I think that readers who like the Series of Unfortunate Events would like Joan Aiken’s books as well. They have a similar mix of plucky kids, villains and a wacky but wonderful world. Although they were written fifty years ago, the Wolves Chronicles have a timeless appeal, not just for kids but for readers of all ages.